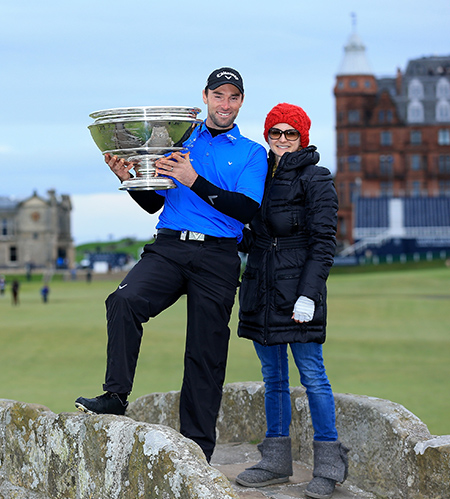 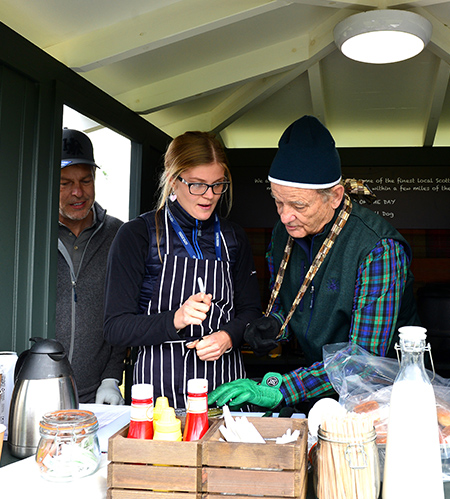 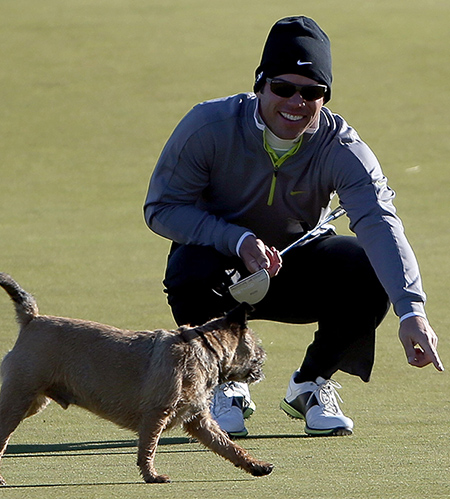 A dog's life for Paul Casey 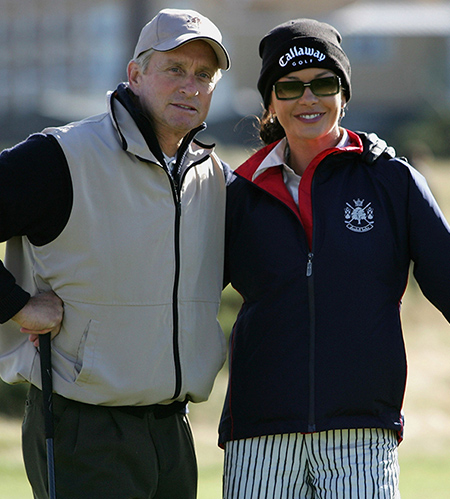 Hollywood at home on the Old Course

It was one of the great golfing pictures of 2014. An emotional Oliver Wilson being hugged by his wife Lauren as he came to terms with the enormity of his success after winning the Alfred Dunhill Links Championship – his first ever professional victory – at the age of 34.

From being a member of the European Ryder Cup team in 2008 and one of the best players on the European Tour, he had sunk to 792nd in the world and, by his own admission, he was struggling. Yet in St Andrews, he defied all the odds and bounced back to win one of the most prestigious titles in golf.

Lauren had flown to St Andrews from London without telling him and was there to celebrate with him as he walked off the 18th green. She said she did not want to tell him she was coming as it might distract him from focusing on the final round.

He said: "So many people had written me off and that hurt, but I kept believing. A lot of people had a part in this and I can't thank them enough. This is pretty special. It's been a long time coming and I have a lot of champagne on hold.”

Wherever Hollywood star Bill Murray goes, he leaves memories behind him.

None more so than for 17-year-old Laura Bremner, the scoreboard carrier in his fourball at the Alfred Dunhill Links Championship at Carnoustie in 2019.

As they passed one of the small huts on the course that serves food, Bill asked her if she fancied something to eat? Laura, a pupil at Carnoustie High School, replied yes.

He popped into the hut and to the surprise of the catering team there took over and made Laura a hot dog.

She said: “He dropped the first one and then went back to get me a second. Then he said 'take your time, eat it and enjoy it'. I've seen Ghostbusters. It's amazing. He's a really friendly, funny guy. I'm a bit overwhelmed.”

“Once you are around him a couple of times, you get to know when he is going to crack a joke or engage the crowd. He always wants to keep it light and funny and make sure the crowd has a good time.”

A dog's life for Paul Casey

In January 2021, Paul Casey was top dog, winning the Dubai Desert Classic to move up to No.17 in the world.

In this Dunhill Golden Moment, dating back to 2012, when Casey was playing in the Alfred Dunhill Links Championship, his round at Kingsbarns came to a sudden halt because of a dog called Digby, who had a liking for golf balls.

Casey came face to face with Digby as he reached the 12th green at Kingsbarns and headed towards his ball. Suddenly the dog appeared and stole it, trotting off the green with the ball in his mouth.

Casey called over a rules official to inform him of what had happened and at that moment a member of the gallery said they had retrieved the ball from Digby, which he handed back to Casey who went on to use it to make a birdie on the hole.

The dog was still wandering around when the players left the green, Casey threw the ball to the dog, but by then he had lost interest.

Casey said: "He looked lost, to be honest. I made friends with him while standing at the back of the 12th green. His name's Digby. When somebody brought the ball back, it had no teeth marks in it, fortunately." 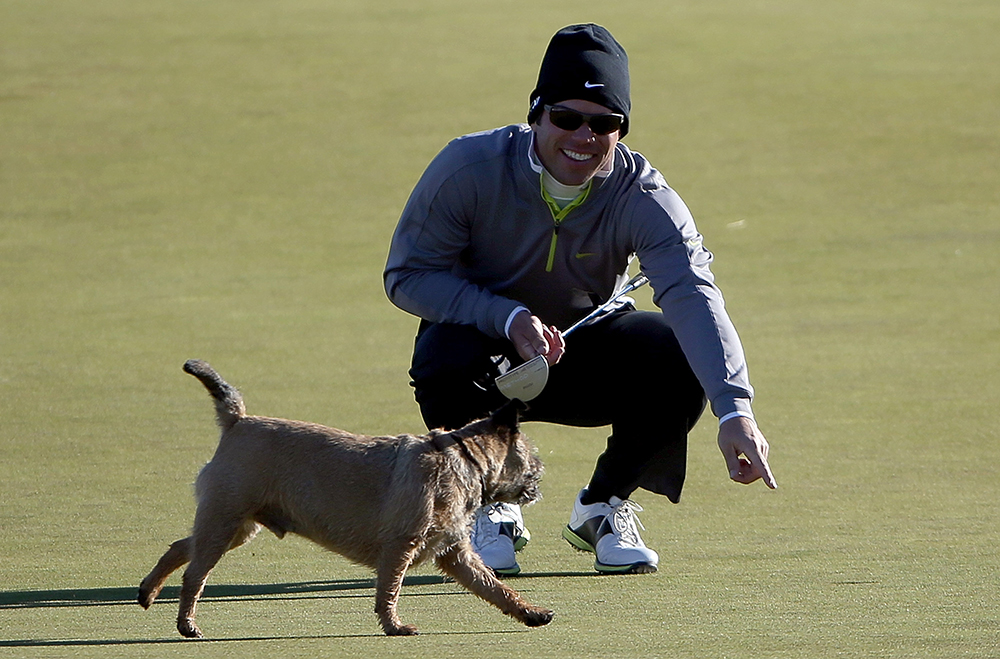 Hollywood at home on the Old Course

Over the next few months, Dunhill Golden Moments, a classic new photo series, will look back over 20 memorable years of the Alfred Dunhill Links.

We revisit 2005, when two Hollywood stars were the centre of attention in St Andrews.

Starring on a different kind of stage, Michael Douglas is seen here practising on the Old Course ahead of the Championship, watched by wife Catherine Zeta-Jones.

Four days later, Michael was standing on the 18th green, applauding as Scotland’s Colin Montgomerie, his partner, rolled in a five-foot putt to become the individual professional champion. 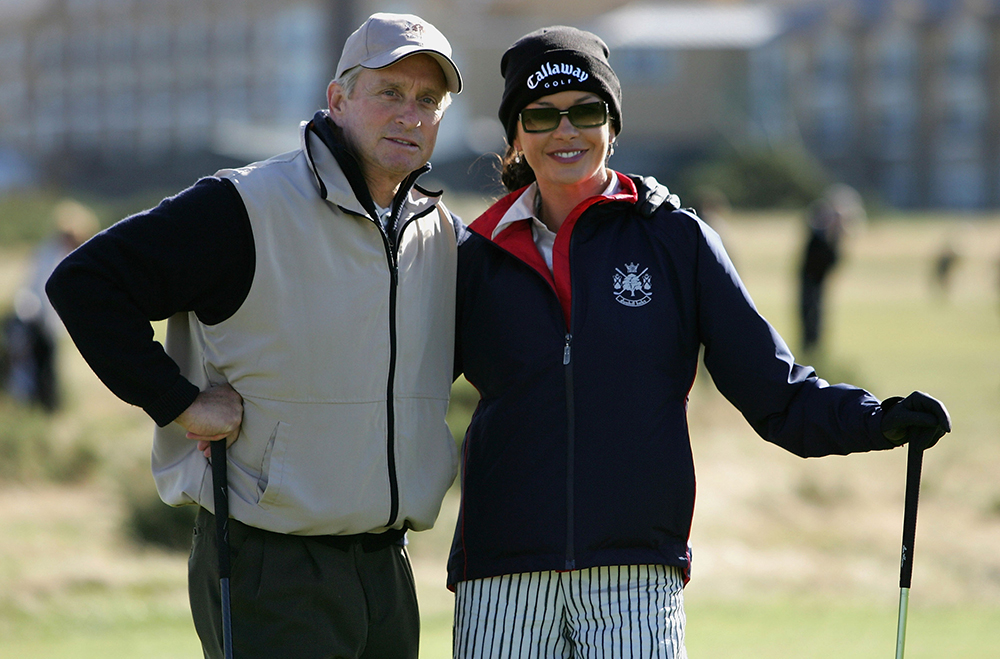 A classic image, Seve Ballesteros on the Old Course